See the MAPS 4 new Oklahoma City animal shelter presentation and other media links related to the PAWS for MAPS 4 campaign for a new OKC animal shelter. 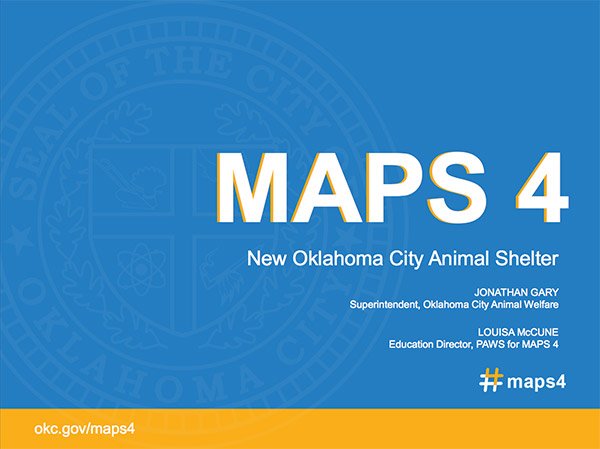 OKLAHOMA CITY — A proposal for a new, state-of-the-art animal shelter was unveiled today to Mayor David Holt and the Oklahoma City Council. The new shelter would cost approximately $43 million and include up to 67,000 square feet. Prior to the presentation, a brief rally of supporters was held on the east lawn of City Hall.

PAWS for MAPS 4 Education Director Louisa McCune addressed the crowd by saying: “Our animals deserve better, and they need your voice. It’s time for MAPS to address the municipal animal crisis in Oklahoma City in a transformative way.”

McCune said the shelter no longer meets the need for a city the size of Oklahoma City, adding that 476 animals had to be euthanized in June alone, mostly the result of overcrowded, outdated, and inadequate facilities.

“Today, Jon and I are proposing a completely new Oklahoma City Animal Welfare Resource Center,” said McCune. “This would involve demolishing and replacing the existing municipal building. Fundamentally, we believe that animal well-being is a critical variable in community health. An animal shelter is an essential piece of social and municipal infrastructure, much like a fire department. It offers a vital and measurable dimension of the human community, and a well-designed and well-funded animal shelter is part of the portfolio of benefits found in vibrant city life. Oklahoma City’s existing animal shelter is completely obsolete and insufficient for a city our size, and we believe NEWS RELEASE this is the perfect next project for MAPS. We implore the city council to give it every consideration.”

Exterior and interior renderings by Todd Edmonds of HSE Architects were presented. Among many features, a new facility would:

- Use all of the best practices for contemporary animal sheltering

- Provide unique species-specific spaces like an aviary and cattery

“We believe it’s time for MAPS to address animal welfare in Oklahoma City,” McCune told the Council. “If we neglect the animals, we’re no better as a city than our peers. In fact, we are demonstrably worse.”

McCune pointed out that the animal shelter is a critical city service that affects people throughout the city.

“Building this will be transformational for our city, its residents, and the animals,” McCune said. “It will impact every street, every neighbor, and every neighborhood in our city, a MAPS project that truly benefits everyone. The role of the animal shelter is not merely about housing lost or homeless animals—it’s about facilitating vital connections between people and animals.”

FAQs About the Animal Shelter

Q: Why does Oklahoma City need a new animal shelter?

A: The current facility is overcrowded, obsolete, and unable to meet the demands of a city the size of Oklahoma City. Further, it was not built to serve the purpose of life saving. When built, it was designed to house animals for three days and then euthanize them if the animals were not adopted or rescued. It is a prison-like, unwelcoming environment, making it difficult to attract citizens to visit the facility and adopt animals. Also, the drainage, ventilation, and building materials are extremely problematic. In June alone, 476 unfortunately had to be euthanized, largely due to a lack of adequate space.


Q: What are the City of Oklahoma City Animal Welfare division and PAWS for MAPS 4 proposing?

A: We are proposing a transformational new animal facility that employs the very best practices in animal sheltering. This would be a game changer for our city, its residents, and its animals. The new facility would be state-of-the art, up to 67,000 square feet, and would feature modern veterinary facilities as well as extensive outdoor space to allow animals the opportunity for exercise and play.

Q: What does the Animal Shelter do?

A: The mission of Oklahoma City Animal Welfare is to promote and protect the health, safety and welfare of pets and people in Oklahoma City. From their website: “OKC Animal Welfare serves more than 21,000 animals each year in the City of OKC, and we also provide animal sheltering services for the cities of Del City, Valley Brook, Nichols Hills, and Tinker Air Force Base. You can adopt and look for lost pets at the Oklahoma City Animal Shelter. We never turn away any homeless, abandoned, injured or sick animals in need, including cats, dogs, rabbits, other small mammals, reptiles, birds, farm animals and wildlife. We’re OKC’s only organization with this unique responsibility. We also respond to reports of animal cruelty, injured animals, loose dogs, animals that are dangerous or a nuisance and enforce OKC’s animal ordinances.

Q: What do local humane societies and SPCAs do?

A: More than 100 organizations are registered with the City of Oklahoma City to pull animals for rescue and foster. These groups work with shelter staff to save the lives of dogs, cats, horses, wildlife, exotic pets, and more.”

Q: Is the existing shelter sufficient? Couldn’t it be remodeled or renovated?

A: No, it is not sufficient and a remodel does not achieve what needs to be done. City staff and division leadership have clearly stated that a renovation is merely a Band-Aid and are advocating for a complete tear-down. Furthermore, in the spirit of historic MAPS projects, the project needs to be transformational—not merely a common municipal project but a visionary endeavor to set our city apart from peer cites.

Q: What is MAPS?
A: For a history of MAPS, a one-cent sales tax in Oklahoma City first approved by voters in 1993, visit this web page: https://www.okc.gov/government/maps-3/maps-history

Q: How many animals come into the Oklahoma City animal shelter?

A: In 2018, a total of 21,659 animals came through the shelter. Unfortunately 2,954 had to be euathanized, despite staff and volunteer efforts.

A: No, but its live release rate has drastically improved over the last decade and is nearing 90 percent. “No-kill” is a complicated term in the animal sheltering world. Many shelters aim for a 90 percent “live-release” or “save rate,” and this is broadly considered to be “no-kill.” Some groups now prefer the term “humane outcomes” to percentages. Basically, even among the experts, there is some disagreement on terminology and what constitutes best practices.

Q: Why is a quality animal shelter important to the quality of life of a city? Don’t we have other problems that are more pressing?

A: We believe that a major component to a high quality of life and the brand equity of a city is measured by the way animals are cared for within a community. Companion animals, wildlife, livestock, and horses are often the most important day-to-day companions for many of our citizens. Furthermore, animal care and control is an essential function of city government. Our animal shelter is a critical piece of the social and municipal fabric of Oklahoma City, much like our fire department. A quality animal shelter is a vital and measurable dimension of the human community and a key part of the portfolio of benefits of urban life. Human health metrics are connected in direct ways to how we treat animals. And, from an economic development standpoint, being perceived as a humane community is an important ingredient in attracting top workforce talent to our city.

Q: I’ve heard about other local rescue groups that are building new facilities. Is this the same thing or different?

A: A couple of local non-profit groups in Central Oklahoma are in the early stages of fundraising to build their new rescue headquarters. These groups are critical partners to municipal animal control divisions, but they do not have the same mission or service to the community. (OK Humane, for example, is 100-percent foster based.) Animal care and control is an essential function of municipal government; local humane societies and rescue groups support the work of city staff and facilities but do not replace it.